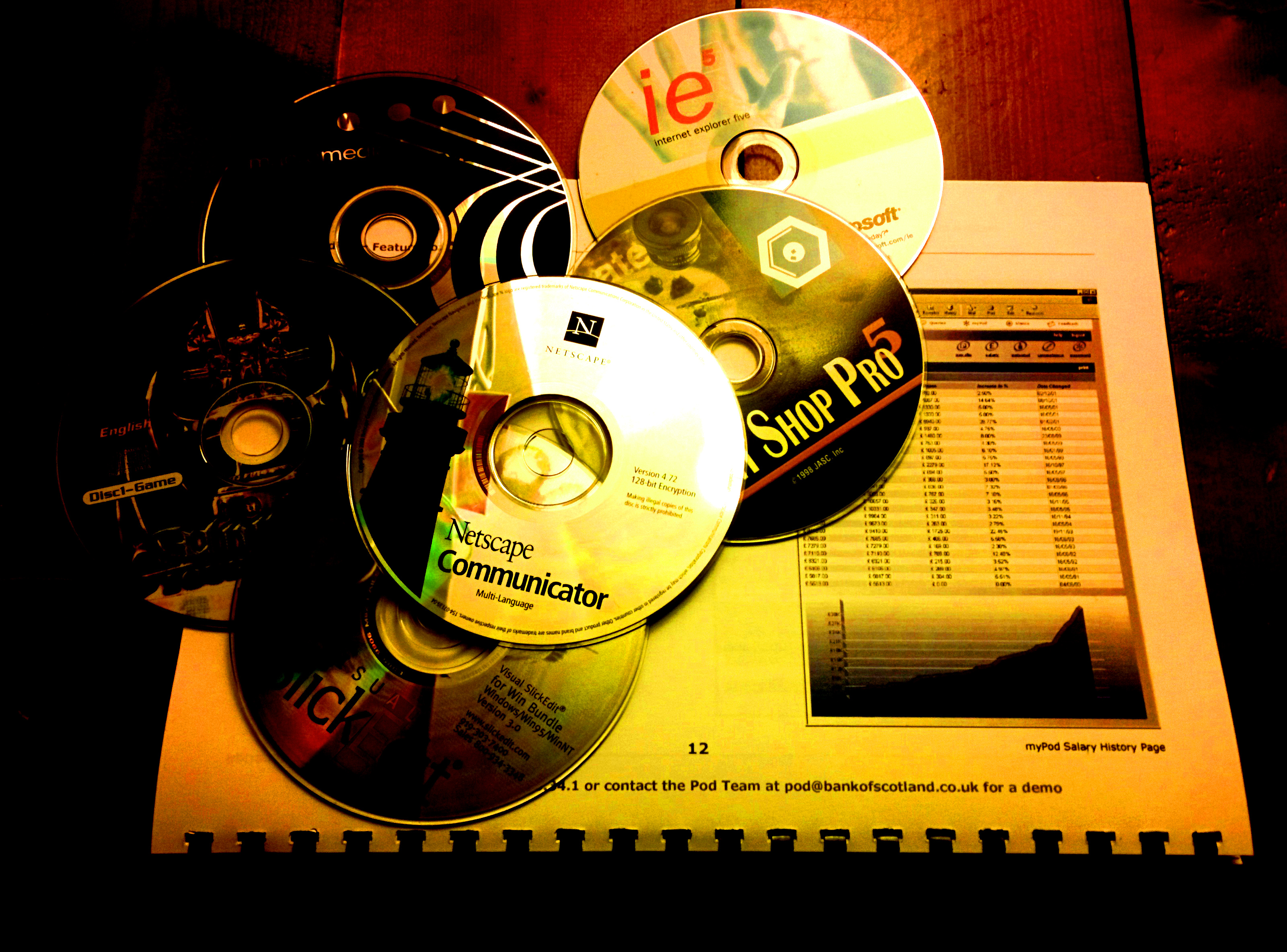 I'm lucky to have only ever had good managers. After a brief period at small electronics company, I sold out and went to work for a bank. I was hooked by the cheap mortgage and a better salary. But there was something more. At the interview I realised it wouldn't be an ordinary bank job - it was a bank training centre in the middle of leafy surbuban Edinburgh. It was 1996.

My 'interviewer' was an ex-maths teacher with a passion for programming. He'd travelled the world on a motorbike. I liked him a lot. The interview turned out to be a jolly nice chat, he didn't seem bothered about my 'qualifications'.

His management style turned out to be very effective. There was certainly nothing autocratic about his style - there were no fixed working hours, we could work from home, he had a budget and he wasn't afraid to let us use it.

Don't Take Yourself Too Seriously

We were encouraged to experiment, build our own PCs, buy interesting software and play games on the local network. I soon realised that there weren't many better bank jobs, actually many better jobs.

Not to say there wasn't bureacracy, autocracy, inefficiency and general politicking - just that we were fiercely protected from it. Our team was a mixture of people from very different backgrounds. Any egos and allusions we may have had were soon eroded by being called on to fix various PC problems around the building. Our moniker: "Technology Training" or simply Techies. When presented with my Secret Santa gift at the Christmas party it was with the introduction "Mark Boas - he's Techie, he's weird!"

Weirdly, we all liked coming to work. It was a beautiful anarchy. Sometimes we threw staplers at each other, sometimes we removed each other's CD Drives and drew fake ones in their place. We were constantly standing over each other's desks, annoying each other and learning new tricks.

Meanwhile Terry - our fierce leader (always first in and last to leave), was battling with paperwork so that he could free up enough time to do some research and start creating modules which would make the basis of our web applications. We'd be shown these new marvels that could work through a web browser. This was amazing of course because (apart from a browser) no installation was required and we soon progressed to the Intranet as a platform.

Our Intranet at the time was like the Internet, but much much faster and only available on the bank network.

My colleague created 'Boston' a fancy intranet website complete with spinny logo and a fantastic game called Portfolio - a game that took share prices from the Internet and encouraged you to compete in a fanstasy share league. This soon gained traction. Stockbrokers were especially fond of using their knowledge to compete against their friends.

It's important to know that we weren't the IT centre of the bank (anything but). We did ask them for support once - a URL for our new applications, but they 'couldn't' give us one, so in the end we just gave out the IP address of our servers - which often lived under our desks.

Terry knew that there was interesting data to be mined from the Human Resources database and in 1997 managed to wangle access to it. He got the main bits working and handed it over to me. It would be really useful, he thought, if people could access this data through something as simple as a browser.

And so began my love of data. We started hooking web-based stuff up to the HR database, bringing back salaries, grades and so on. 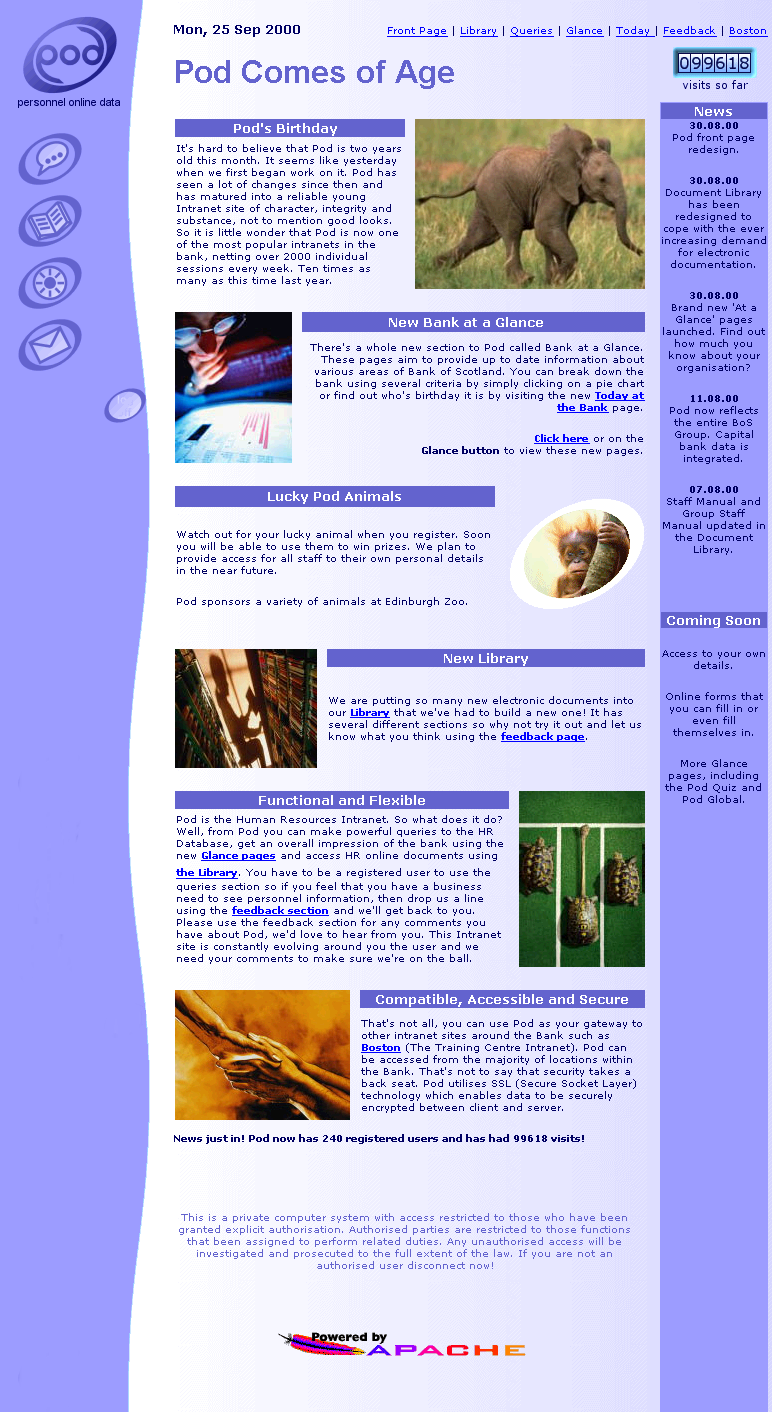 We gave everyone access to their own data and made good headway with something we called an electronic payslip. We graphed salaries over time and called it the salary curve. People started to flock to our new system. We had a captive audience! Crucially, my boss gave me complete ownership over this new application. I called it Pod (well my flat-mate did), I designed the logo, created all the graphics, spinny gifs, UI, the lot. I wrote both front-end and back-end code, configured the server - it felt like my baby, but in reality, behind the scenes and taking very little credit, sat my boss, tinkering with methods for abstracting authentication, reliably connecting to databases and figuring out what the very latest technology could enable us to do.

I added a controversial Birthdays page, news articles and games activated by clicking on a photo of my boss's beard in the team photo, complete with high-score table. I can't emphasise how important the high-score table was - again, we had a captive audience.

I don't consider myself a designer and I'm a bit colour-blind but I changed colours on a whim, modified icons, created random mascots upon registration and my favourite bit - a clickable (3D!) piechart dynamically created from that all important data. Those lovely pies allowed anyone to split salary by gender, department and salary, meaning (for example) that you could get a breakdown of male and female salaries under or over a certain salary point. Very revealing. I kind of hoped the newspapers would get hold of it. 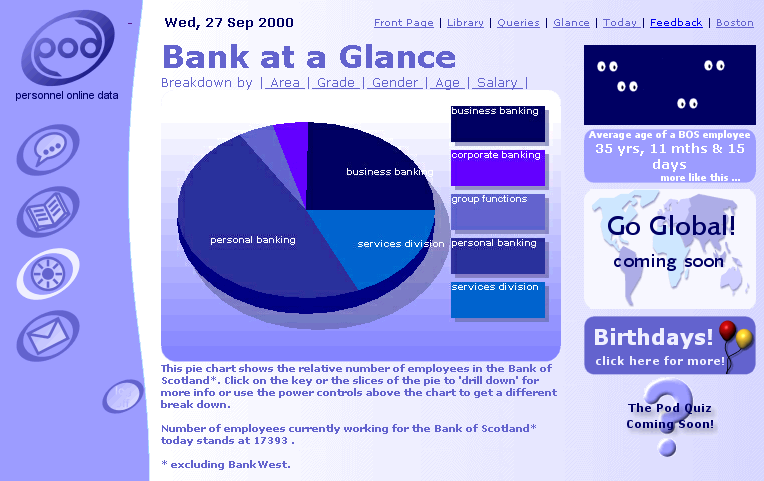 In the end they shut down Pod and Boston - we hadn't followed the correct procedures. Instead they spent an unknown amount on something called SAP. I don't think the web interface was very good, maybe it's improved by now, but I'm pretty sure there are no games hidden in beards.