I was recently shocked to hear that a significant number of people believe that Helen Keller did not write the books that have been attributed to her. This appears to be more prevalent amongst younger generations. I’m not sure how this disinformation came to exist and why, however I do think it’s quite a typical symptom in what’s being labelled a post-truth society. If you’re surprised by this, maybe you shouldn’t be. There’s a lot of disinformation about.

Increasingly I find myself thinking about the part tools like Hyperaudio can play in helping people discern what is and isn’t likely to be true. I’m not an educator but I can imagine that in the right hands it might be a useful tool to aid the teaching of Media Literacy.

So what do we mean by Media Literacy? CommonSenseMedia suggests “Media literacy is the ability to identify different types of media and understand the messages they're sending.” Or perhaps the understanding of how media can be manipulated to put forward a specific point of view, or make you feel a certain way.

if we don’t start teaching media literacy in our schools, this is only going to get worse https://t.co/AWA6kTcWwK

When we’ve taken Hyperaudio into the classroom one of the things we show students is how background music can affect a video’s message. Music is often considered innocuous by many students and so it’s always interesting to see their reaction when they see their perceived meaning of a video significantly altered with the slight of hand of adding a different soundtrack.

Hyperaudio is all about creating media through mixing together clips from a number of different sources, combined with the ability to add transitions, titles and background music. We try to make media accessible so that almost anyone can create remixes. Timed-transcripts (where every word has a start time and duration) facilitate a new form of text-based editing. Now people with basic text editing skills can manipulate media. Hurrah!

We’ve seen many "media" tools (social or other) being used in toxic ways which their creators had not initially anticipated, or simply didn’t care about. So when it comes to Hyperaudio we are extra cautious about accountability, traceability and integrity of media. 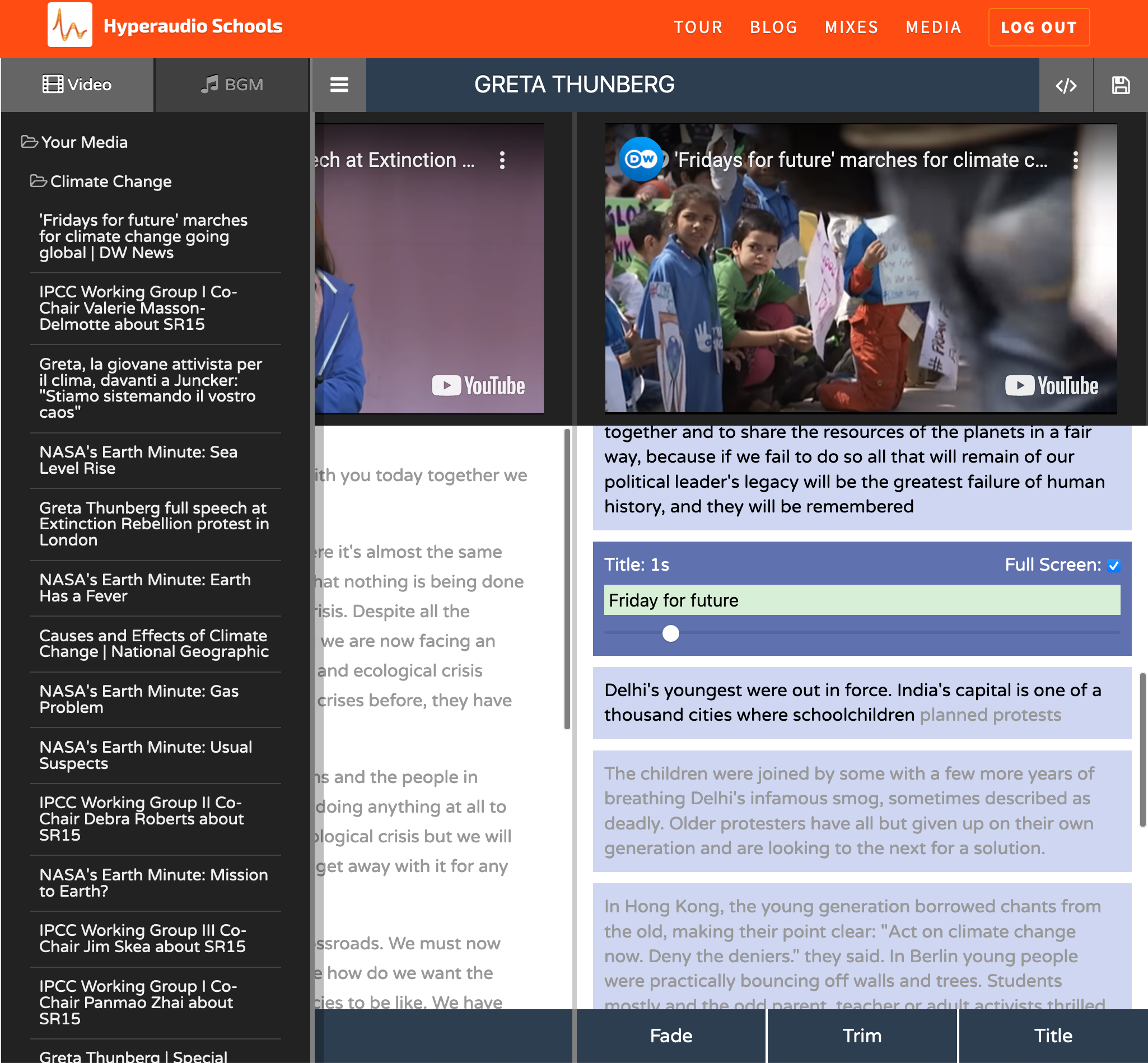 The traceability part is core to the Hyperaudio platform. We approach remixes in a referential manner. Rather than mixing down to a single file, we loosely reference each part of the remix with start and end points of the sources used. So a remix is just really a playlist of pieces of media starting and stopping at specified times. This works surprisingly well, even for people with limited bandwidth. But there are other advantages. Aside from being able to remix remixes in a non-destructive manner – in other words we can expand a remix, not just reduce it. Importantly we can reveal the source of any clip used in a remix and encourage users to trace the full source and establish context. Context is important – as one of the key mechanisms of deception are misleading clips shown out of context.

So context tracing is built in thanks to Hyperaudio’s referential nature. What about the integrity of media sources – how do we establish a trusted source? Luckily the web provides us with a part of a potential solution – through its web site address or more technically the Universal Resource Locator (URL).

I used to teach a media literacy course and I kinda wish I still did so Andy Ngo’s videos could be put to good use. Selective edits, stripping context, text that doesn’t match visuals, emotional manipulation, obvious bias, historical untrustworthiness, the man does it all!

Part of Media Literacy is to be able to reliably identify a source (and its biases). Can we whitelist a number of reliable sources from their URL? Are sites like Wikipedia and the Internet Archive reliable sources of truth? Other people know much more than I do about this problem and again, I’m not an educator – but I think for the purposes of teaching Media Literacy they might be reliable enough, at least in most cases. But it’s worth casting a critical eye over any material referenced. Discussions resulting from evaluating media sources are valuable and I think part and parcel of the Media Literacy journey.

"Fall-Forest" by Chris Sorge is licensed under CC BY-SA 2.0